The Romanian Parliament is changing the country’s criminal codes under the false pretext of complying with a E.U. Directive

Home Analize The Romanian Parliament is changing the country’s criminal codes under the false pretext of complying with a E.U. Directive
2   
By admin Analize Comunicat 18/12/2017 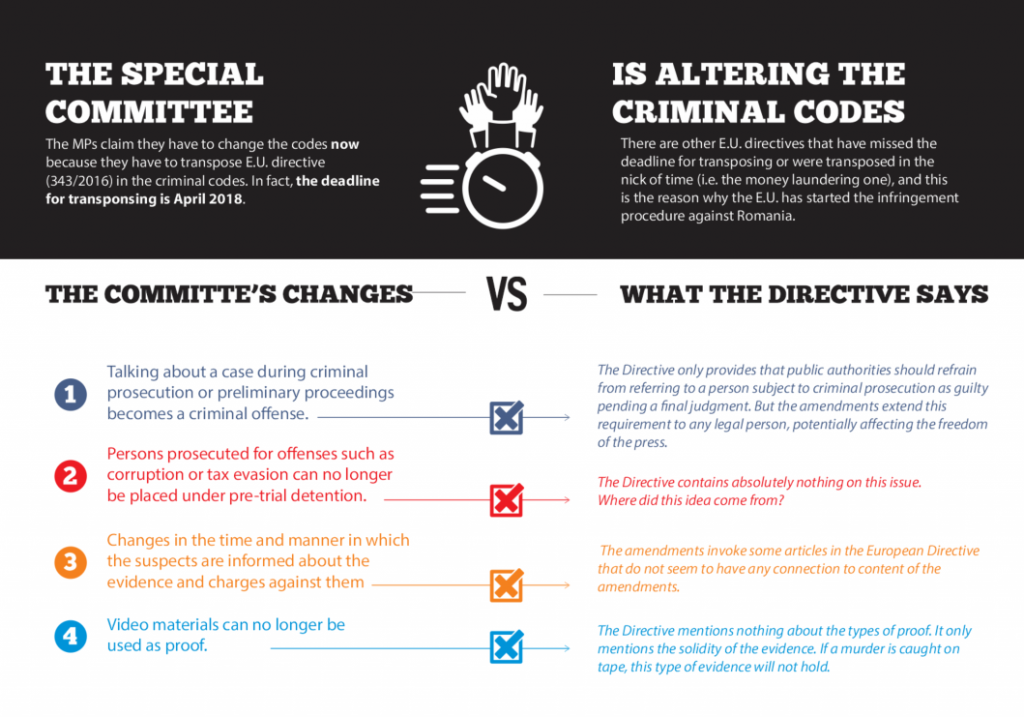 The Joint Special Committee of the Chamber of Deputies and the Senate for the systematization, unification and ensuring legislative stability in the field of justice (the “Iordache Committee”) announced on December 13th, that, although initially it was to suspend works during 14-16 December for the national mourning, it will work at least during 14 December to transpose EU Directive 2016/343 into the Criminal Code and the Criminal Procedure Code.

The very title of the legislative proposal reveals its purpose to transpose the European Directive into the national law. The Committee President, Florin Iordache, accused by the opposition to have proposed amendments to the criminal codes that go beyond the framework for transposing the Directive, said today about the proposed amendments: “They do not go beyond the framework of the directive”.

Our fact-checking initiative has verified whether his claim is true or false. Specifically, we check to see if the proposals under discussion with the Iordache Committee are actually meant to transpose EU Directive 2016/343. We do not check their necessity or their particular impact, but we focus our analysis strictly on verifying the assumption that these amendments to the Criminal Code and the Criminal Procedure Code rely upon – are they really about transposing the European Directive? You can read the whole fact-check here.

Based on our analysis, a conclusion can be drawn that, as shown by the amendments proposed by the Iordache Committee today, the justification behind the amendment of the Criminal Code and of the Criminal Procedure Code in the light of the need to transpose the provisions of EU Directive no. 2016/343 into the national legislation is partly false . We do not question whether they are good or not, but we do question their link  to transposing European legislation into the national law. The statement of the president of the special committee that the amendments brought to the criminal codes do not exceed the framework  of the Directive is at least partly false.

First of all, the deadline for transposing the Directive is April 2018, which does not explain any hurry to adopt the changes now, in a fast forward procedure.

Second of all, regarding the contents of the amendments proposed by the majority coalition, we identified at least four major changes which do not seem to be related to the transposition of the Directive, which we summarize in the simplest manner possible (see the technical details in the table from the detailed fact-check):

It is the same the world over. We elect people who look good, speak well, and dress well — forgetting that crooks and psychopaths love politics for the opportunity it gives to get rich without working. The next thing they do once elected is to pack the civil service with their friends, giving them the power to regulate in their favour.

There should be a strict limit on the number of civil servants paid for with taxpayers’ money. There should also be lifestyle audits of all politicians. Anyone leaving office richer than when they were elected should immediately be subject to close investigation and fined.